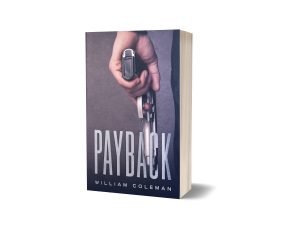 What if a member of your family, or perhaps a close friend, was the victim of a violent crime. The police not only find those responsible, but they arrest them and bring them to trial. A sense of relief sets in as justice would prevail. Only the unthinkable happens and a legal technicality forces the judge to dismiss the case. The perpetrator who caused so much pain was walking free. How far would you go to set things right?

In Payback, Alex Dunn and others like him have been assembled into a secret organization, The Lexington Project, who seek to deliver justice to those who slip through the fingers of the law. Names are delivered and the team develops plans to eliminate the targets, a punishment befitting the crime.

A computer hack sets the organization on edge, and in the aftermath a series of events Alex on the run and every other member of the team dead, a fate he narrowly escaped.

Payback follows Alex’s search for the those responsible the killings even while they try to finish the job. Making things even more difficult, he is pursued by the FBI who always seem to be one step ahead of him.

An action-packed story of suspense and mystery, finds Alex in a fight for his life and his freedom, as he follows every lead to reveal the truth. But a twist of fate shows that not everything is as it seems.