I sat down with the intention of writing the second book in my Jack Mallory Murder Mysteries series.  A story idea came to me and I plotted it out and started writing.  The problem was, shortly after starting, I realized that the storyline did not fit into the Jack Mallory world.  It was more suited to a character that was a private investigator.  I was too invested at that point to just drop the idea.  So, I reversed gears and started rewriting.  The result was The Contract: Book 1 of S. Hawke Investigations.

For fans of Jack Mallory, I would like to note that I have already begun work on the next installment of that series with a story more appropriate for the detective.

Sebastian Hawke, who insists on being called Hawke, is a former homicide detective who was fired for striking a superior.  In the aftermath, he settles into a new life as a private investigator who eats and smokes a bit too much.

When he catches his first case, being asked to get compromising photos of a cheating wife, he feels he has fallen as low as he can, degraded to the level of peeping tom.  But bills must be paid, so he reluctantly accepts the job.

It doesn’t take long for Hawke to realize that some things aren’t adding up and he soon becomes far more involved than he ever expected.

Being a private investigator allows Hawke some freedoms that lead to less conventional methods and a more physical approach.  A fun character to write, you can expect more installments in the future. 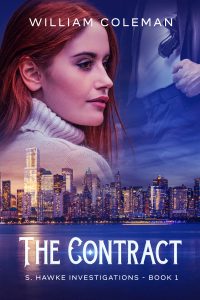 My newest book is now available on Amazon. FIRST FRIDAYS follows the investigation into the kidnapping of a woman and her daughters. The story tracks the movements of the main…

I have finished another book, a standalone mystery titled First Fridays, and I am sharing the cover today.It will be available on Amazon, in a week or so, on Kindle,…